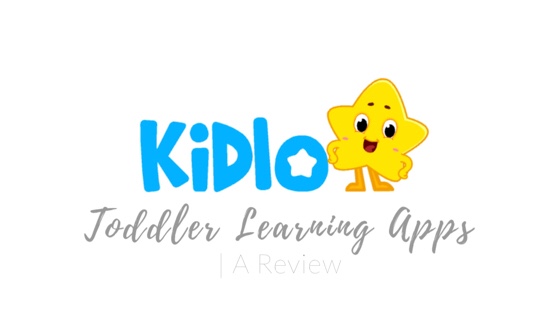 Disclaimer: A few weeks back I was contacted and asked to honestly review these two children’s apps in return for a 3 month subscription to these apps, all content and opinions are completely my own.

Now before I get started into the review, I just want to say how I used to be one of those mums that didn’t want my daughter growing up surrounded by technology and screens and certainly not watching Paw Patrol as part of her daily routine, however being in the land of technology that we are its simply impossible to do so. She can’t avoid technology and it will be a huge part of her life growing up, so I’ve been looking for children’s apps these past few months so that she can learn and grow with technology as well as without, as I’m sure everyone will know a 3d shape just isn’t 3d unless you are holding it in your hand so yes some activities I do with her will be without a screen but learning her 123’s and abc’s as well as her 2d shapes amongst other things is something apps are great for, however its all about finding the right one and I actually think I’ve found it.

Luckily the lovely company got in touch at just the right time as we’ve just come back from holiday and we all know how gruelling it is to be stuck in a car with a screaming toddler or even dare I say it, stuck in a restaurant.
These apps did wonders, Seren got stuck right into them and although she wasn’t on them all the time, she knew exactly what it was that she was doing and just watching how her little brain works was mesmerizing, even more so it kept her quiet when nothing else would, when we were in the car or when we were going out for food or even when she’d got a little crabby and bored we’d sit her in the pram as we go for a walk and these apps have kept her at bay and it’s actually helping with her speech which if you’d didn’t know my daughter is 2 and a half and barely says singular words, very smart and good at telling us what she wants with her actions but not so good at talking, I’ve noticed how she’s started repeating the words that the app calls out and I’m just surprised with how much she’s learning and how interactive she is with the apps more than I ever thought she would, she even knows a few of the songs which I just think is adorable.
My number 1 love with these apps is that you can download the individual rhymes and games so you can play and sing and enjoy the apps on the go which is such a benefit for a an inconsolable toddler with no other way of quieting them down. 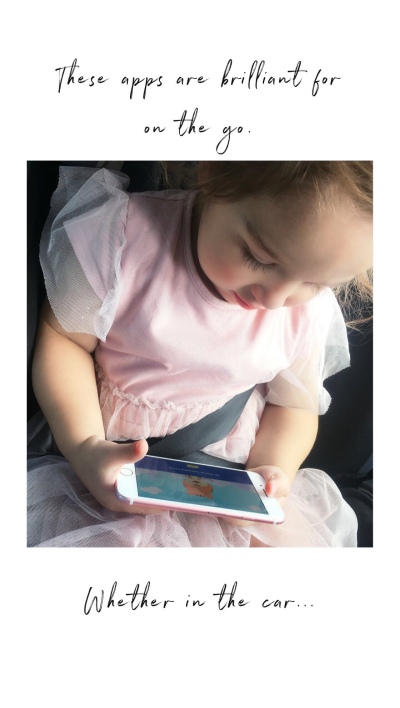 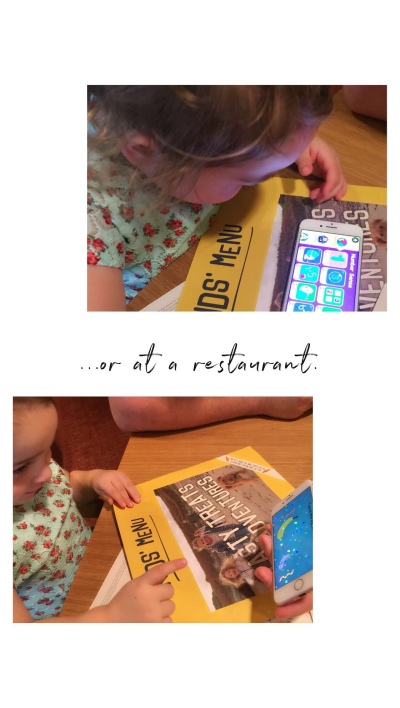 Quite possibly her favourite is this one, she always picks this one first and does a few of the matching and categorising games before moving on to the numbers and then the children’s songs on the other app.
What I like about the games is that its not repetitive and it gets slightly harder with each correct answer so they are having fun and learning all at the same time.
There are two portions to this app the pre k, and kindergarten which for us in the uk is basically aimed for 2-5 year olds, my daughter is 2 and loves this app with all its bright colours and especially loves the congratulatory end to each game, she loves that sense of reward when she’s got something right. 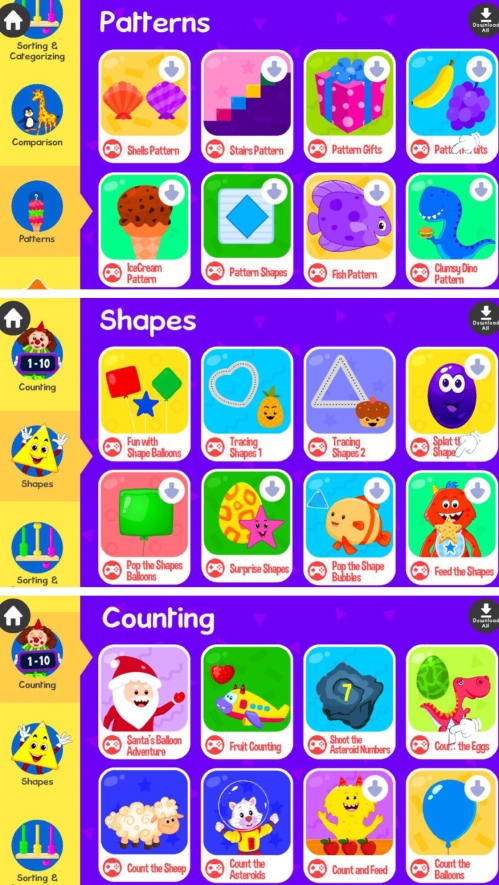 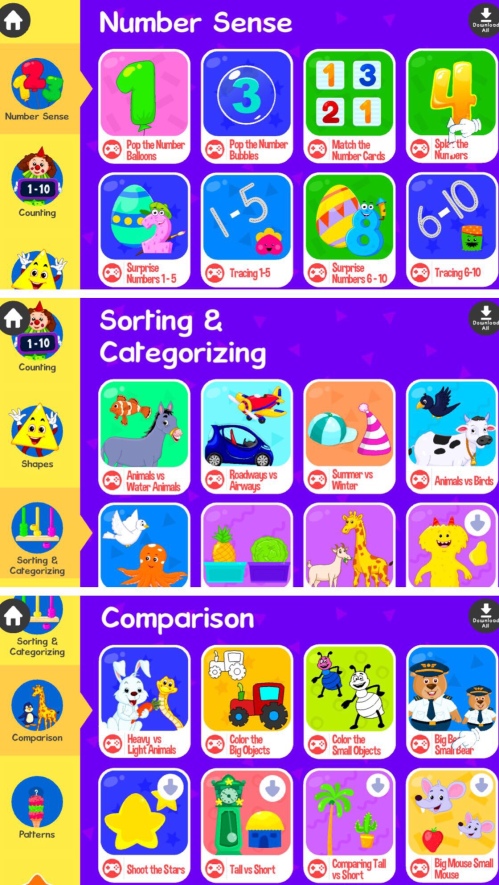 There are well over 180 games to teach your children the basics of match including activities in adding, subtraction, counting, numbers, shapes, comparison, patterns & categorising.

This app is doing wonders in improving her learning and preparing her for school in September & will be a great app to keep with her so she can grow and learn.

I love how these apps are laid out and how easy it is to navigate even for a toddler, she knows it all better than I do haha. Her favourite part of this one is the fun colouring games including surprise colouring which reveals a character by randomly colouring it which she is in love with.

This app helps a lot with her speech even more so than the maths games, because she tries to sing along and the learning of the animals and their noises help a lot too. This app is meant to help with first steps in reading as well which is fantastic.

With well over 500 stories and rhymes and 300 more activities there are endless amounts of fun to be had, its something Seren hasn’t got bored with yet so that’s always a good start.

There are also a tonne of other apps that kidlo do and I definitely recommend checking them out too, they include coding, adding and substracting, English and stories. they are seriously amazing apps & whilst you can get them for free, paying the subscription opens up a whole app of magic and enjoyment for your child for hours, they are bound to love everything the apps have to offer to just like my little one did.

View all posts by CookiezMeltdown